Planning the Trip - Europe on Fifty Dollars a Day in 2017

All of a sudden I decided I had better take another trip to Europe while I was still capable of traveling on a tight budget.

If I can do it, anybody can do it.
I am 68 and on a limited income. I manage. And I travel.
So if you can rough it a little, walk, climb stairs, and don't care too much about fine dining - you can do this too!!
Choose your travel companion wisely - my oldest son came with me and he is a wonderful travel companion, patient and easy going and we like many of the same things. Some find it odd, a mother and son traveling together - nobody bats an eye when a mother and daughter travel together. I could look the world over and not find a better travel companion than him - sadly, he could not say the same about me but he recognizes that my traveling days are limited and he is a good sport and very kind.
It helps to be well matched as far as budget and expectations are concerned.
I wanted to see the place where my grandparents were born, Norway, a very expensive country!! That would be stop number one and not for many days as the cost of living is so high!! I have been to Norway once before, but not to the west coast. The best part!! Gorgeous, stunning, wonderful. 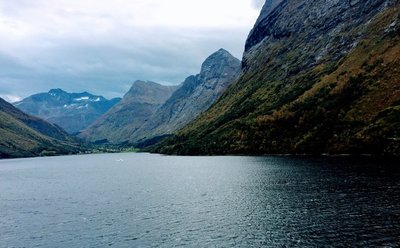 Because Norway is so expensive we had to find some cheaper countries. Neither of us have been to Prague so the itinerary started to take shape.
I booked tickets to the opera in Prague before we left, less than eleven dollars for a seat in the nosebleed section of a famous, storied theatre.
The Balkans are cheap - easy to do most countries on a budget of fifty dollars a day. Also we have been to Serbia before and loved it. Now we wanted to see more of the former country of Yugoslavia as well as Albania, a very interesting place.
We chose Malta for good weather and because it is on the way to Spain. So our schedule was forming up, leaving it a bit loose for last minute plans but we had some must-sees and some maybes and it all worked out!!
Shoulder season is cheaper, and we would go for two and a half months. Total budget for one person, all in, six thousand dollars and you could do it for cheaper. As it was, I came in a bit under budget.
We booked our tickets with West Jet discount seats, no frills, no legroom, no food and carry on only. Calgary to Gatwick via Vancouver on 27 Sept 2017 was two hundred and fifty dollars one way, I waited awhile to book the return trip as it was more expensive coming back in December.
We returned direct from Gatwick on WestJet no frills on 13 December for three hundred and fifty dollars so six hundred for round-trip airfare, not bad, maybe could have found something cheaper but I was satisfied.
We also booked flights from Gatwick to Oslo with Norwegian Air, risky but we had a three hour layover in Gatwick, it worked but I wouldn't recommend it!! Tickets were about eighty dollars each. Much cheaper than flying directly from Calgary to Oslo but if you live in the US or close to the border then Norwegian Air, a wonderful airline, offers super cheap flights to Scandinavia and other destinations. Look it up.
Also this turned into a very long day, I was amazed by my own stamina!!
In fact I was amazed at my own stamina for much of the trip! All of a sudden I could climb 75 stairs carrying a suitcase. Travel is stimulating, motivating and energizing.
Wizz Air, out of Hungary offered super cheap flights from Nuremberg to Belgrade, Serbia - under fifty dollars each so we booked those also, in advance and left our trip from Norway to Prague to chance.

OK - carry on luggage only and we are going for two and a half months - easy in the fall when you can live in black.
I was clean and coordinated if not fancy!!
I wear a neck pouch which is camouflaged by either a jacket or a scarf. My jacket has two zippered pockets on the outside and two deep inner pockets. It folds into a pouch and can be stuffed into the suitcase.
I find a backpack uncomfortable and would rather drag a suitcase with wheels.
In 2012 we backpacked across Europe and saw seventeen countries and I found the backpack awkward. I also took a backpack to China in 2015 and after about a week bought the carry-on suitcase with wheels that I am still using!!
My suitcase is regulation size for both WestJet and other discount airlines in Europe. I also bring a small daypack which easily fits under the seat.

I packed some instant coffee pouches, an immersion heater to boil water in hotel rooms that don't offer a kettle, instant oatmeal and a few chocolate bars and bags of nuts. As I used up the emergency snacks I made room for souvenirs and gifts.
Another handy gadget is a cell phone bungee cord - since my phone is my camera it was always safe and handy around my neck.
Re cell phone - my phone wasn’t unlocked so calling was expensive but I had a plan that basically cost ten dollars for a 24 hour period - this was for emergencies and the cost kicked in if you actually got or made a call. So you need to otherwise have the phone on airplane mode as an incoming call that goes to voicemail also kickstarts the ten dollar charge. Not that good actually, check with your provider. Everybody expects you to have phone service so it is tricky but doable.
Read on about our trip - we had a wonderful time and I have awesome memories and no regrets, a journey of a thousand miles begins with a single step. 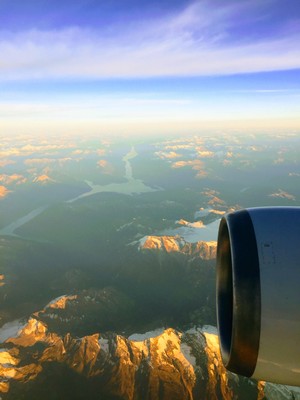 Next Table of contents

Comments on this blog entry are now closed to non-Travellerspoint members. You can still leave a comment if you are a member of Travellerspoint.

If you aren't a member of Travellerspoint yet, you can join for free.